Georgia grower Brian Rayburn says he used to second guess himself when it came to irrigation…but not anymore.

“It’s very common to have doubts regarding when and how much to water – with a cotton crop, especially,” he said. “In fact, sometimes you can overwater a cotton crop, which will actually reduce yield.”

In addition to cotton, Rayburn produces peanuts, corn and pecans on his 2,400-acre operation in Thomas County, Georgia. During the 2020 growing season, he agreed to help with a field trial to establish yield and water use differences between grower-controlled center pivots and those controlled with FieldNET Advisor®, the industry’s first irrigation scheduling tool.

“I used FieldNET Advisor on a cotton crop of about 105 acres,” he said. “There are certain times during cotton’s growth stages where it needs water, but it’s not as water intensive as crops like corn. With cotton, it’s more of a timely need for water than a season long need.”

Using FieldNET Advisor, Rayburn received continuously updated, field-specific irrigation recommendations. Generated from field data, cloud-computing capabilities, machine learning and more than 40 years of crop and irrigation research, the advanced technology helped him decide precisely when, where and how much to irrigate.

“My experience following FieldNET Advisor’s recommendations was good. There were times when I thought the crop was getting close to needing irrigation, but FieldNET Advisor showed me that it had plenty of water,” he said. “I was a little nervous but, after looking at the app, I could see the available soil water, so it made me feel much more comfortable.”

Because the crop received ample rainfall during the growing season, it didn’t require a lot of irrigation. But when he did need to put water down, Rayburn said FieldNET Advisor’s recommendations aligned very well with his observations and expectations.

“FieldNET Advisor helps me improve my irrigation decisions,” he said. “I think it shows that we often over-irrigate, which increases costs and reduces my bottom line.”

Rayburn added that FieldNET Advisor provided him with water usage data and reports that certify him for sustainability programs, such as the Better Cotton Initiative.

“Using FieldNET Advisor makes me feel more environmentally responsible. There’s a big push from agencies for producers to be better stewards of the land, and FieldNET Advisor helps me do that,” he said. “I’m not aware of anything that’s comparable to FieldNET Advisor. I’ll definitely continue to use it in future seasons, and I’ll recommend it to other growers, too.”

For more information about FieldNET Advisor, talk to your local Zimmatic dealer or visit www.lindsay.com. 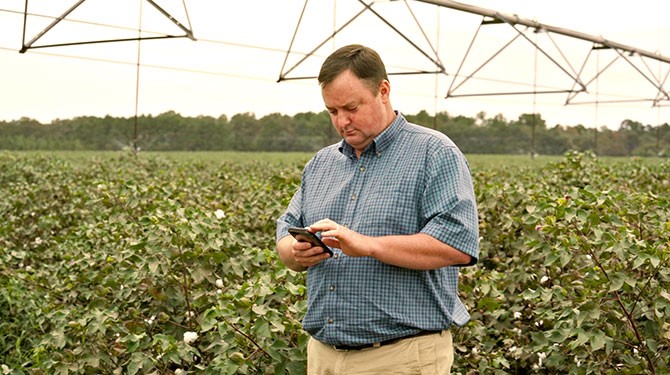